Do you know the rules on comparative advertising?

Last week, the Committee of Advertising Practice (CAP) issued an update on the rules around comparative advertising.

With comparison central to many financial services promotions, it seems like a good excuse to revisit the regulations on this.

What is comparative advertising, and what do Marketing teams need to know about it?

What is comparative advertising?

What do Marketers need to consider when doing comparative advertising?

In its update, CAP says that while comparative advertising ‘can be a great way to make your company stand out in the marketplace and can also help consumers decide which product or service is best for them’, it can also ‘generate scrutiny and complaints, both from your competitors and the public’.

As a result, it’s vital that any Marketing teams looking to employ a comparative advertising strategy understand the rules.

CAP sets out four questions to ask before you undertake comparative advertising:

1. What claim do you want to make?

CAP suggests you think ‘carefully about the claim you want to make and how it will be understood by consumers’. If it’s at all ambiguous or unclear, you will risk misleading people.

If you’re also regulated by the FCA, this should sound familiar – and be standard practice. Under FCA rules, you already need to ensure that your marketing, advertising and sales materials are clear, fair and not misleading and that customers are treated fairly.

If you fail to meet these standards, the regulator isn’t afraid to act. You can read more here about how the FCA responds to misleading promotions.

Is your claim objective or subjective?

The Advertising Standards Authority (ASA) – the organisation that enforces CAP’s rules – states that you need to have documentary evidence to uphold any objective claim you make.

And the ASA is likely to regard any what it calls ‘superiority and top parity claims’ as objective.

The ASA defines superiority claims as any that claim to be better than competitors, such as ‘No. 1’ or ‘market leading’. Top parity claims are those which state that an advertiser is one of the best, for example, ‘just as strong as any other’.

Again, this need for evidence and supporting information is echoed in the FCA requirements, which demand that firms display relevant disclaimers for products and services, with the required prominence.

2. Is it a comparison with an identifiable competitor?

And being ‘identifiable’ doesn’t only relate to competitors or products that are actually named in your ads.

A competitor or its products may be identifiable without being named, depending on the ad, the claims made, and the audience, context and nature of the market in which you are operating – for instance, some niche markets may have very few competitors.

You can read more on comparisons with identifiable competitors on the CAP website.

3. Are you comparing the right things?

Comparisons with identifiable competitors must compare products meeting the same need or intended for the same purpose (this is set out in CAP Code rule 3.34).

According to the CAP requirements, this means that, ‘the products being compared must display a sufficient degree of interchangeability for consumers’.

In practice, this means it’s potentially acceptable under this rule to compare products like: branded and non-branded versions of the same underlying product; organic and non-organic produce.

CAP caveats their requirements by stressing that ‘you must always ensure the basis of the claim is clear and that the ad isn’t likely to mislead consumers materially’.

As above, this is has strong similarities to the FCA’s rules on clarity and the requirement to be ‘clear, fair and not misleading’.

4. Is the comparison verifiable?

The CAP rules state that:

‘Comparisons with identifiable competitors must objectively compare one or more material, relevant, verifiable and representative feature of those products, which may include price (CAP Code rule 3.35).’

For this comparison to be considered ‘verifiable’, the ad must include enough information to enable consumers to fully understand, and check the accuracy of, comparative claims.

This means that a comparative ad should include, for example, information about what the comparative claim is based on and (in some cases) a signpost to where consumers can find this information.

Regulated by the FCA or another industry regulator? Don’t forget their rules too

All UK advertisers must abide by the CAP rules. If you’re also governed by an industry regulator, like the FCA, you have to ensure your advertising follows the financial regulator’s rules as well.

We’ve detailed above a few specific areas where the CAP guidance and FCA regulations dovetail. If you want to refresh yourself on the FCA’s rules around financial promotions, you can read a summary of those here.

If you want a practical way to help you to comply with the FCA’s financial promotions rules, you can download a copy of our Financial Promotions Checklist for Marketing. The checklist provides a useful reference for any Marketer producing regulated promotions and you can get your free copy from our resources library. 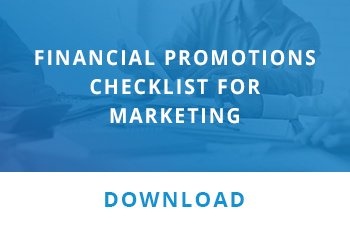 How to ensure consistency in regional and local marketing

Consistency – of both messaging and look-and-feel – is essential in marketing. If you want your hard work on brand to pay off, you need to ensure consistency across your regional and local marketing activity.

How marketers can be both creative and compliant

For regulated Marketers, regulatory compliance is as important as content creativity.

Twitter is a fundamental element of most marketing strategies. In the era of content marketing, sharing content on social media is a key driver of web traffic and downloads. But marketing via Twitter is not without its risks.