What is the FCA ‘perimeter’ and why is it important?

This week the Financial Conduct Authority published its first ‘Perimeter Report’. What is it all about, and why does it matter to Compliance teams?

What is the FCA perimeter?

It is the term used for the boundary between what the FCA does and does not regulate. The perimeter determines which firms require FCA authorisation and which don’t.

In his introduction to the report, FCA Chief Executive Andrew Bailey writes of the need for the perimeter to be ‘kept under constant review’ as the external landscape shifts. He cites innovation and new product and service offerings as examples of changes that may impact the perimeter. Firms may also deliberately try to avoid the perimeter, to prevent themselves falling under FCA regulation.

Why is the perimeter a particular issue now?

Bailey cites three reasons why this is particularly relevant now:

The Perimeter Report details the FCA’s responsibility – outlining what does and does not fall within its remit.

The Financial Services and Markets Act 2000 (Regulated Activities) Order (or The RAO, for short) is the primary source of information setting out the activities regulated by the FCA.

Other UK and EU legislation supplements this, defining other areas of the FCA’s responsibility.

Why does the perimeter matter to customers?

Financial services customers, whether business buyers or public consumers, need to understand whether the product or service they are buying is regulated by the FCA. Creating a culture of trust requires that businesses are clear about their status – FCA regulation confers a level of professionalism and governance that can make firms more trustworthy in a buyer’s eyes.

The recent failure of London Capital & Finance is, again, a good example of the issues that can arise when firms blur the boundaries between regulated and non-regulated activity. LC&F failed to clearly communicate which of its products were regulated, and failed to meet FCA standards around compliant promotions for those that fell under the Authority’s remit.

Why does the perimeter matter to financial services firms?

In a similar vein, firms need to understand – and clearly convey – which of their products and services are regulated.

While FCA-regulated firms can carry out unregulated activity, this can ‘be confusing to consumers’ – the FCA points out particularly so if its logo is used, for example on promotional materials.

Firms need to make clear the distinction between their regulated and unregulated activities.

They should also ensure that any promotions that cover regulated activities follow the regulator’s rules on being ‘fair, clear and not misleading’. This is something the FCA flagged in January this year, in a ‘Dear CEO’ letter warning firms about promoting unregulated investments.

What is the FCA doing to clarify the perimeter for firms?

It details in the Perimeter Report some of the products, services and sectors this action will focus on, including:

What firms can do to increase consumer confidence

Much of the perimeter report focuses on the need for clarity, which gives consumers the assurance they need when buying financial services. Reducing ambiguity around what is regulated and what isn’t, and the need for firms to make this clear in their communications, is central to the FCA’s approach.

The report highlights financial promotions as an example of activity where firms can increase this clarity. It reminds firms that it does not approve promotions itself, but that ‘the responsibility is on the authorised firm to check that the promotion is compliant’.

To make sure you’re meeting the regulator’s requirements, it’s worth refreshing yourself on what you can do to make sure your financial promotions approvals meet FCA standards.

If you are moving to a digital approach, in terms of communications or service delivery, it’s also a good idea to make sure you are minimising the risk involved in your digital transformation projects.

It’s also important for firms and Compliance teams in particular to understand the boundary between services that qualify as ‘advice’ and those that don’t. The FCA’s current work to review the financial advice market includes measures to clarify this boundary, and again is worth familiarising yourself with.

Get to grips with the complex world of regulatory compliance jargon

Keeping pace with the rapidly-changing compliance landscape can be a full-time job in itself, not helped by the wealth of jargon and terminology in the area.

That’s why we’ve published a financial compliance glossary to help Compliance professionals with the acronyms and terms used in the sector. You can download a free copy here. 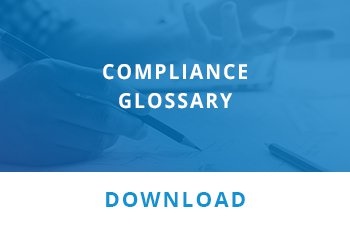