How is the FCA responding to innovation and technological change?

In a speech last week, the FCA’s Nick Cook, Director of Innovation, talked about the regulator’s approach to innovation and technological change.

In the speech, given to a conference of financial services Chief Data Officers, Cook said that the Authority ‘must adapt’ to keep pace with technology-led change in the markets it regulates.

He also examined whether the Authority could enhance its innovation services to ‘broaden relevance and appeal’ and how the FCA can ‘better support RegTech solutions’.

The speech also touched on the regulator’s ambitions to respond to climate change and address the issues facing vulnerable customers.

What change is the regulatory environment facing?

In his presentation, Cook referred to world that ‘is changing rapidly, no more so than in financial services’. As a result, financial regulators have to ‘continually focus on outcomes and adapt to remain fit for purpose’.

Cook refers to change that ‘has been largely driven by the data revolution… firms now know more about their current and potential customers than ever before, allowing them to create increasingly bespoke products and experiences’. This is something we have explored before, looking at the value and potential of data for financial services.

This ability to harness data, though, is not all positive. Cook points out that:

‘Increasing personalisation can result in people being left behind. While lower prices for lower risk can seem a desirable outcome, the converse of consumers deemed ‘high risk’ being priced out of insurance or prevented access to credit is an often unwanted and unintended consequence.’

…another example of the potential risks to vulnerable consumers.

How is the regulator responding?

The regulator has frequently stated its desire to make more use of technology – so-called regtech – to make regulatory compliance more streamlined and effective. We reported in March on its plans to use technology to help firms with regulatory reporting.

Cook remarks that financial regulators ‘have to continually adapt to remain fit for purpose’ and ‘to continually focus on outcomes’ – and, importantly, that they ‘have to anticipate what might next be coming down the road and to shape rather than be shaped by the inevitable next wave of change’.

This is also something we’ve reported on before; in July we looked at the FCA’s plans for a new platform to improve the way it collects data.

In his speech, Cook focused on two areas; the regulator’s approach to innovation in general and RegTech specifically.

The FCA’s approach to innovation

In the five years since the launch of its ‘Project Innovate’, around 700 firms have used the services the regulator provides via its Sandbox, direct support and advice unit.

There is more to do, though; while new offerings and new players have been seen in certain areas of the market, retail banking particularly, some sectors – like asset management and retirement savings – have not experienced the same level of innovation and disruption.

As a result, the regulator is keen that its Sandbox and related support mechanisms are broadened so that they address the needs of the wider financial services industry.

In opening cohort 6 of the Sandbox last month, the FCA specifically sought out propositions that:

Technology as a force for good – encouraging, particularly, solutions that support responses to climate change and do not exclude certain segments of the market – is a focus of the regulator’s work.

The growth of RegTech

Regulatory technology – RegTech – is referred to by Cook in his speech as ‘the sleeping giant of the financial services world’. While investment in the area has grown, it still has significant untapped potential.

This is something we’ve explored previously, in our blog looking at how RegTech can help to improve regulatory compliance.

One key reason for the slow take-up to date is, Cook believes, the difficulty of proving value – convincing the financial services industry that that a new way of doing things is better, more efficient, and more cost-effective than the current way. Developing trust in new solutions can be a significant stumbling block.

From the RegTech providers’ perspective, challenges in testing new solutions can be a barrier. The regulator is therefore exploring the possibility of developing a digital testing environment, perhaps along the line of its existing TechSprints, where very focussed proofs of concepts can be tested and then demonstrated to industry for a finite period of time

Regulating in a global environment

The need for regulators worldwide to adopt and harness technology was another theme covered in the speech. Cook cited the FCA-chaired Global Financial Innovation Network, which now includes four federal US regulators, as an example of joined-up global working, and commented that:

‘In a digital world and future, where physical borders are increasingly irrelevant to how business is done, we have to be part of a global community of regulators seeking to bring about disruption on an international scale.’

One message that came through clearly from Cook’s presentation is that both financial services providers and the bodies that regulate them must act to adapt to, and enjoy the benefits of, technology and innovative approaches.

If you’re a regulated firm, you need to temper your innovation ambitions with the need to comply with relevant legislation. We’ve looked before at how banks can innovate in a compliant way and shared tips on the 5 compliant steps you need to take if you want to innovate.

The potential for RegTech to make regulatory compliance cheaper, quicker and more efficient should be explored – although reducing the risk your digital transformation projects, including the risk of compliance breaches, needs to remain a priority.

For more background on the current regulatory landscape – and tips on how to tackle the challenges you face – you might want to read our whitepaper, Why governance, risk and compliance are what you should focus on now. The whitepaper is free to download, and you can get a copy here. 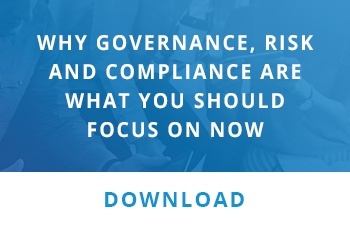