When the Financial Conduct Authority updated its social media guidance in March last year, it brought up-to-date guidelines that had previously been unchanged for some time.

Prior to the update, the guidance for regulated firms using social media as part of their financial promotions was unclear. Today, although the guidance is more prescriptive, many regulated marketers are still unsure on how they can make the most of social media and still work within the guidelines.

The good news is that it’s possible to have an effective and compliant social media strategy. Here we share 10 do's and don’ts for FCA-compliant Twitter.

This is something the regulator was at pains to clarify in its new guidance, as many people believed Twitter’s immediacy made it a ‘real time’
promotion – like phone calls or emails – which aren’t subject to such strict regulation.

2.   Hashtags do not denote promotions

One significant change in the March 2015 requirements was to the use of hashtags. Previously, #ad was suggested as a way of showing that a tweet was a financial promotion. The 2015 guidance reversed this, stating that hashtags are not sufficient to denote adverts.

3.   In fact, beware of hashtags generally

The guidance also warns against the use of hashtags overall. The Financial Conduct Authority’s concern is that using a hashtag (for example,
#assetmanagement) takes the reader to a curated page of tweets on that topic, most of which won’t be from the firm in question.

Fair, clear and not misleading is one of the key tenets of the FCA’s thinking on financial promotions. And tweets are no exception. They may be
short, but if  you can’t make what you want to say clear and fair in 140 characters, think about whether another channel might be better for your
message.

The regulator’s guidance says that firms need to think about their target audience, the nature of the product or service they want to promote
and the likely information needs of the average reader of the promotion. All these will inform the way you word your tweet.

6.   ...And think about how that audience could grow

One of Twitter’s main benefits, of course, is its ability for your content to be shared. Retweets are one of the objectives of posting on Twitter. But
you need to think about this when posting a financial promotion. Will your tweet still be fair, clear and not misleading if it reaches a wider
audience than you originally intended?

The guidance says that each communication has to comply with the relevant rules on a standalone basis. This means that any promotional tweet
needs a risk warning. In reality, this usually means that tweets need to be factual rather than promotional.

8.   Rules on prominence apply in tweets

Don’t think you can get away with risk warnings added in small fonts as images (nice try!) – as the FCA’s rules on prominence apply to tweets as
elsewhere.
Risk warnings, disclaimers and disclosures need to be prominent or they will fail the FCA’s test.

9.   Use images in a compliant way

Although ‘image advertising’ – for example, tweets which only contain a firm’s logo, details of their activity and contact details – can be used,
some of the same rules apply. Images still need to be fair, clear and not misleading.

10. Retweeting can be a financial promotion

The guidance states that if you retweet a tweet from someone else – for example, a client expressing satisfaction with your business – this
constitutes a financial promotion. You therefore assume some responsibility for any non-compliance in the original tweet. Think carefully before
retweeting!

Hopefully this has given you a good flavour of the FCA regulations on Twitter. You can read more in our 10 best practices for compliant social media, which you can download for free here. 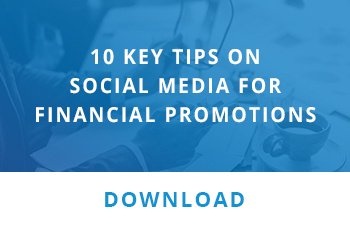 The FCA’s new advice for firms on Brexit

Today (31 January), the UK officially leaves the European Union. In light of this, the Financial Conduct Authority has issued updated information for the firms it regulates, on issues they need to consider during the implementation period.

The implementation period is due to last until 31 December 2..

What do City workers really know about the SMCR?

This week, New Model Adviser took to the streets of the City to find out how much people really know about the Senior Managers & Certification Regime.

The resulting video shows the response they got – a mixed bag in terms of awareness of the new regime and its implications. It’s worth five minutes –..