How can women overcome the barriers to becoming CEOs?

Just six of the FTSE 100 currently have female CEOs, according to the ICAEW. As of August this year, there were more men named Steve heading FTSE 100 firms than there were women.

The importance of diversity in the boardroom has long been recognised. Having a range of views enables boards to make rounded decisions, and can help to counteract some of the behavioural biases that can hinder good choices.

But despite this, women are still in the minority on boards and in particular as CEOs.

The accepted value of a diverse board

It’s acknowledged that having a diverse range of people and perspectives in your boardroom is a positive. And the female brain has been identified as the secret weapon of the best boards.

Sadly, though, many boards persist in appointing new members in their own image – largely male, middle-aged and from similar socioeconomic backgrounds. Businesses are quick to defend their choices; we’ve previously explored the 10 reasons firms give for having no women on the board.

But with even those boards that perform better on this accused of appointing women for symbolic value, there’s a long way to go before we see equality in the boardroom.

What can women do to improve their prospects of becoming CEO?

A report carried out by Saïd Business School, University of Oxford, last year believes that females need to take ownership of their careers if they want to reach the top.

Quoted in an Executive Grapevine article, the report’s author, Andromachi Athanasopoulou, Associate Fellow at Oxford Saïd and Assistant Professor in Organisational Behaviour at Queen Mary University of London, claims that ‘the critical factor in a woman achieving the top job is still active ownership of her own leadership career’.

The report identifies three factors that make the difference when it comes to women’s potential to be accepted as CEO material.

While all leaders face work-life trade-offs, the report notes that these can be particularly acute for women.

Accepting this and facing down any criticism is a key step for any woman aspiring to the CEO role; as the report says, ‘For a woman to recognise her leadership ambition requires making a conscious and effortful choice about what she will become, what she will give up, and the criticisms she will face’.

The CEOs that participated in the research underpinning the report, says Amanda Moss-Cowan, Research Associate at Oxford Saïd, take work-life balance issues seriously, but have ‘framed work–life decisions like other business decisions: accept the responsibilities and move on’.

Overcoming imposter syndrome or other confidence barriers – self-imposed or set by others – is another key step on the journey to female CEO.

Acting in a mentoring capacity, the CEOs in the study were keen to encourage young women to ‘seek stretch assignments for their development’ – in other words, look for projects and roles that take them out of their comfort zone in order to take active ownership of their career progress.

Female CEOs, the report found, typically lead in a nurturing, role-modelling way. But, interestingly, also manage to develop behaviours themselves that are typically seen as ‘masculine’. The report cites skills like ‘“seeing the big picture”, developing “vision”, and other strategic capabilities’ among these stereotypically masculine abilities that successful female CEOs have managed to adopt.

This adoption of some ‘masculine’ behaviours leads female leaders to another important skill; self-management.

What does this mean? The report notes that even the successful female CEOs in its survey sample can find it difficult to adopt ‘masculine’ leadership traits while still feeling true to themselves.

To be successful without compromising their own integrity, female CEOs have identified a need to ‘blend the different types of behaviours and translate them into something entirely new – and stereotype-free. Instead of being assertive in one situation and empathetic in another, for example, the leaders in our study found a way to be empathetically assertive.’

Adopting these new ways of being and working, instead of trying to adapt wholeheartedly to behaviours that might feel false or uncomfortable, has enabled women CEOs to respond to the requirements their role makes of them.

Giving your board the best chance to succeed

Of course, whether a woman succeeds to CEO is not entirely within her own control. Even if you adopt the traits the report identifies, there remain any number of barriers to success. But these three areas certainly give food for thought to any female looking upwards to the top role.

And equally important, when it comes to the performance of the board and the organisation, having female directors or CEOs is not the only secret to success.

You need to ensure your board members have all the information they need to make informed decisions, and that meetings have a clear purpose, are chaired effectively and can utilise user-friendly board packs.

Many boards have started to take a portal-based approach to producing their board papers, finding that this can deliver improvements in terms of efficiency, user-friendliness and information sharing.

To find out more, you can read our Board Portal FAQs, which look at some of the most common queries about portals and their advantages. They’re free to download, and you can get your copy here. 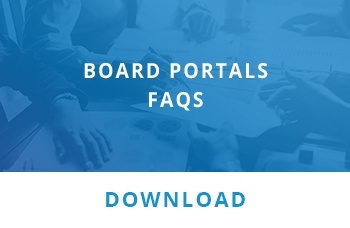